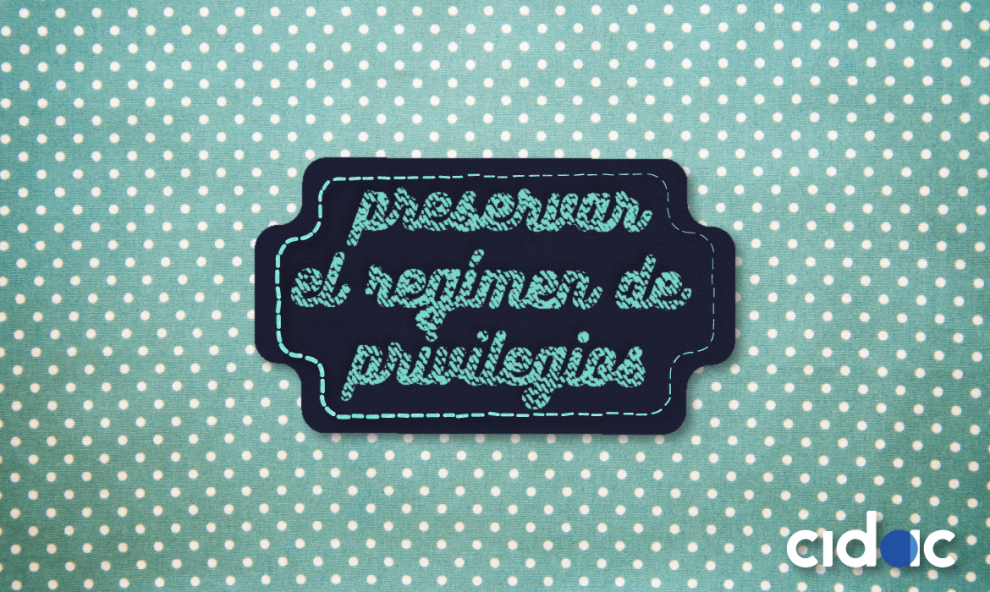 They were interminable years of luxury, with all of the vices imaginable and more, the worst excesses. Life was to be enjoyed and absolutely nothing was to be changed. Power and money accumulated, everyone rendered obeisance and many, the majority, were afraid of it. Few dared to oppose it.  But then what had to happen, happened:  in 1982, the doctor told him: lose weight or die. Juan G. got the message and went on a diet. But he did not understand the entire message: he did not want to change other than the indispensable: why make a change if everything is going excellently well? He had a surgical procedure and returned to a sustainable weight: from nearly 150 kilos he came to weigh 70 but did not change his lifestyle. His privileges and those of his entire cohort were not subject to discussion, independently of what the doctors told him. Not even his wardrobe.  That’s when the mending, the patching up and the small quick fixes began.

This formerly obese person walked down the street with enormous clothes that did not fit him. They tripped him up whenever he took a step, buffeting passersby without his even noticing. The baggage was so great that he was unable to focus. His pants fell down and his shirt pocket fit him at the level of his buttock. But no: he was not going to change his wardrobe because his historical integrity came first.  He was not disposed to modify his way of being: with his operation he got what he wanted, which was to survive and continue enjoying his life, just like before. Yes, the circumstances had changed, but with his rhetoric his pace of life could be maintained. The world owed him and not the reverse.

With it all, some changes and adjustments were indispensable, but as long as they would not alter the essential:  he would not surrender anything. A seamstress moved his pocket to the correct place, more or less… The leather worker made him a belt tailored to his waist size but the wardrobe remained fixed to the realities of the past. He looked ridiculous and his movements were exceedingly clumsy, but life was to be enjoyed, not shared. From mending to mending, Juan G. went through life as if nothing had happened. He weighed less but his vices had not changed at all: the parties, the excesses, the expenses. He had changed so that nothing would change. Juan Government continued alive and kicking. The country, well, that’s the least of it.

In the last three decades all types of reforms have been carried out. In the eighties, the crisis dictated the inevitable, that which Brazil has to do now: lose weight and update itself to the new reality. However, losing weight was not sufficient: the expenditure was reduced but the country continued not functioning. That was how the reforms began: the liberalization of imports, the deregulation of diverse sectors and the North American Free Trade Agreement (NAFTA). This produced spaces of growth and productivity.  NAFTA turned into an exceptional regime because it consisted, de facto, of the adoption of international rules and standards. Safeguards were carved out –adjustments and fixes- so that Juan G. and its cronies would not have to change anything.

Years later came reforms such as the criminal one, which should now be entering into operation. The same for corruption and transparency. In each and every one of these cases it appeared as if there were changes but with the wholehearted intention of not modifying absolutely anything essential: the objective was not to construct a modern and dynamic country but rather to preserve the regime of privilege. Instead of arguing about how to implement the approved legislations in better fashion, the dispute continues to be over how to avoid their content and objectives, how to create exceptions for something to appear to work while nothing changes.

The political system born at the end of the Revolution adapts, more or less, but not in order to change. It is willing to incorporate new members into the paradigm of privilege (such as the PAN and the PRD) but not in order for the country to grow and develop because that would imply its stopping being what it is and what it is for.

The problem now is that some of the mending that have been adopted entail consequences and are susceptible to creating new problems, some potentially uncontrollable. The criminal reform is incomplete and on not being terminated in time and form, would lead to the inevitable liberation of thousands of prisoners, many of these violent and dangerous. The half-way economic liberalization is condemning the economy to perennially mediocre growth levels. Growth of public spending diminishes growth. The perennial lack of attention to the problems of Pemex could lead to the public debt’s increasing another five points of the GDP or maybe more. Mending has its limits because it does not solve anything: it only achieves kicking the can ahead until the reality catches up, becoming uncontainable and hazardous. No more than sheer self-deception.

The government –in fact, the State as a whole- has the enormous challenge of responding in the face of a reality that is deteriorating swiftly. How will it respond? Its options are not many, but it is clear that it can proceed in two ways: on the one hand, it could see to what is urgent, accepting its errors and duplicities to emerge from the hole in which it finds itself, at least for now. In some cases, it would have to recognize the non-viability of what exists (such as the criminal system) and draw itself in to avoid a political and social catastrophe. The alternative: change the paradigm, purchase a new wardrobe and give the country a chance.