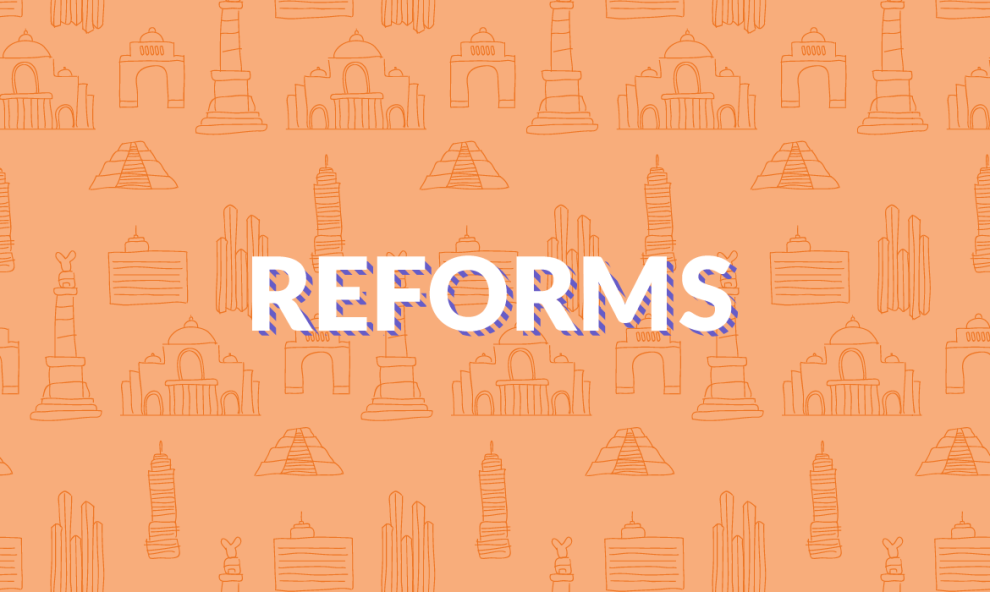 There’s something Platonic in the current domestic debate: the constitutional reforms are like Plato’s shadows, the secondary ones are the reality. The first described the dreams; the second encountered the world of interests of the most diverse sort. The big question is why the process got stuck.

The easy part is identifying “the bad guys” and there’s no lack of proposals. The newspapers are full of explanations of what is or what has been the factor that got things stuck. For some the problem lies in the contradictions inside the opposition parties: whether it be their internal election processes or the real divisions that characterize them. Although much of this is true, they fail to explain why the government does not proceed to directly approve the proposals with their hanger-on parties.

Another line of interpretation blames the perennially favorite villains: the greedy companies that don’t want to relinquish their privileges or monopolies. Here it’s also clear that no entrenched power of any type (union, business, political) is going to cede their perks without a fight. However, there’s a contradiction between this explanation and the former one. It’s possible that both –intraparty discord and the might of private interests- have come together to produce the paralysis that characterizes the moment, but it’s obvious that contradictions are equally present in the governing party, the PRI. Thus, this line of argumentation also does not explain how it’s possible that the enormous drive that characterized legislative activity in 2013 has suddenly deflated. Something else must be holding up the process.

The core problem resides in the dislocations that the reforms promise. For starters, there’s no reform without dislocation: reforming entails change, affectation, correction. If a reform doesn’t alter the established order, it ends up being irrelevant. The objective must be that of constructing a new order and not merely dislocating the existing one: and the problem of the reforms –above all, but not exclusively, the secondary reforms-, is that they are designed merely to dislocate. Their rationale is political to a greater extent than economic or organizational.

The reforms of 2013 enjoyed support among the population. Part of this derived from the impact produced by the very fact that “at long last” the legislative machinery was in motion, but much had to do with the implicit promise of constructing a new environment. In order for a reform to have viability a support base is required that sustains the reformist government and makes it possible to neutralize the opposition of those who could be losers. Although ethereal and never expressly articulated, that support base contributed to achieving the success of the first stage of the reform, above all in the two reforms that really are truly susceptible of improving the life of the populace: the energy reform and that of communications. However, that support base was not the product of an intentional construction but rather of the generalized fedupedness of the society with the government and the politicians.

As in Andersen’s tale of the emperor’s new clothes, the secondary reforms have laid the governmental proposal bare: they made it evident that there was no transformative project but merely one of control. There are various indicators that reveal the nature of the project: they may be observed in the law of competition, in the differences in the way it would affect those now referred to as preponderant, the candor with which control of the Internet was attempted. Above all, what stripped the reformer project of its halo was the lack of a promising future. Nobody’s going to support a project in which the entire population loses. Assuming the opposite would be ludicrous.

In the final analysis, the shadows ended up dominating the promises, creating a scenario prone to maintaining the status quo. The constitutional reforms painted a panorama of possibilities, the secondary reforms promised a world of restrictions, everything under the control of the government. No one should be surprised by the current situation.

The manifestation of all this is the new national political setting: a space in which dispute holds the upper hand over construction. Although the opposition parties could, perhaps at another moment in their history, articulate a grandiose proposal of transformation, construction depends on him whose responsibility it is to govern. The problem is that the government entertains a profound contradiction between its public face and its private objectives: the former promises a transformation, the latter have been exposed and are everything but transformative.

The great merit of President Peña’s government to date has been in his shrewdness and skill in taking advantage of the moment and of all of the instruments within his reach to achieve the first thrust toward the country’s transformation. His great lack has resided in the narrowness of the ulterior motive that inspires his project. Control is not, cannot be, a governmental objective. Control could be a means to achieving relevant objectives, but is not a substitute for an integral proposal of development. Likewise, reforms are means through which the attainment of a transformative objective can be advanced, but are not substitutes for the project itself. The project is lacking.

The good news is that the reforms approved in 2013 open up enormous opportunities for the development of the country; the bad news is that there’s no evidence of the existence of a vision capable of making these possible in the present reality.