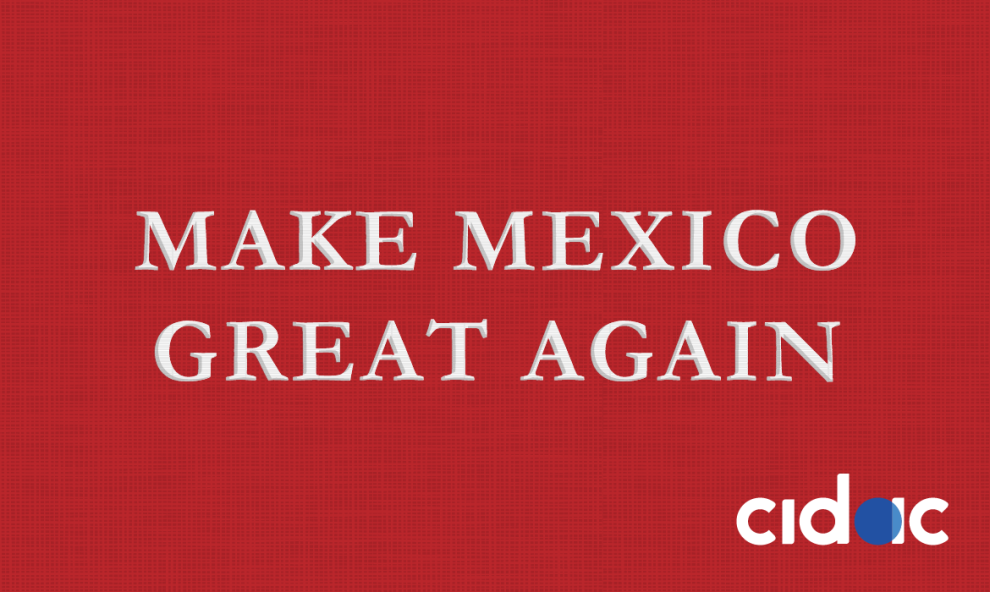 The anger is tangible and fully justified: the risks for Mexico of a Trump presidency are evident; the scathing offenses that the U.S. presidential candidate has lavished upon Mexico and Mexicans are plainly inadmissible. All of this is clear and indisputable. The question is whether Mexico has the possibility of “stopping” Trump and derailing his candidacy, all this without risk or pernicious consequences. The latter is key: our geographic coordinates has provided us with enormous economic opportunity, but not substantial political power. I do not think anyone is willing to affirm Mexico as the regional powerhouse. Things being thus, without lessening the dishonored national dignity, the Mexican response to Trump cannot be visceral: Mexico has to act to improve its options, not its risks.

The strategy of a small actor facing a great one must consider the circumstances, and potential consequences, of its actions. For several months, the Mexican government has been acting –and boasting- in migratory matters, promoting the naturalization of Mexicans who qualify for it, particularly in the so-called swing states, where no party commands a systematic majority: the presumption being that the vote of the new citizens could make the difference on Election Day. The numerical logic is apparent, but not its political rationality: if unsuccessful, not only would Mexico must contend with the new, disliked, president, but also, at least potentially, with his ire.

It is obvious that Mexico has to “do something”, but that “something” cannot entail a devastating risk. Many Mexican presidents have gone to the U.S. Congress to “read them the riot act;” some have transcended the bilateral issues (such as migration and weapons) to venture into exceedingly rugged terrain, such as the Middle East and Vietnam. None achieved U.S. benevolence: expecting to would have been absurd. Observed from our side, any U.S. meddling in the internal political affairs of Mexico has always been rejected and denounced as unjustified intervention. U.S. nationalism begins where the differences among their political parties end.

Additionally, in the specific case of Trump, there is evidence that, throughout his campaign for the Republican Party nomination, his numbers improved whenever some Mexican personage, as Vicente Fox exemplified, would appear in the media criticizing him. Trump’s hard-core political base fervently believes in his message and any help on our part would do nothing but strengthen that base: the last thing Mexico should do is to upset (even more) the henhouse.

Mexican governments from the end of the eighties have maintained an excellent relationship with the U.S. Intergovernmental interaction is fluid, problems and claims are seen to (though not always solved) and, every time there is a crisis, the number one priority is avoiding its escalating. On at least two occasions, half of Obama’s cabinet came personally to Mexico City to prevent a burst of tensions. Mexico’s problem is not the relationship with the U.S. government but with the U.S. society. There lies the deficit which is acute and the cause of the strength and resonance of Trump’s rhetoric.

The great benefit of NAFTA was to open a world of opportunities for investment in Mexico and the export of manufactured products for our neighbors to the North; the great cost was having become a subject of U.S. internal politics. Up to the nineties, Mexico was seen as a pivotal country for the U.S. for geographic reasons, but it did not constitute a factor for internal political discussion beyond that of the agencies dedicated to drugs and the like. The debate that led to the ratification of NAFTA changed that reality and it generated a stigma for Mexico and everything Mexican through many U.S. regions and communities that have come out losing in the process of technological change, the disappearance of traditional jobs and the moving of manufacturing plants to Mexico and other countries. The political fact is that Mexico ended up being blamed of innumerable evils for which it was not responsible, but in politics that does not matter.

In the long term, what has to be done is axiomatic: win over U.S. society with our exceptional assets, such as culture, history, people, service, vitality, humor, etc. Nothing is lacking for achieving this, except for a long-term commitment. In the short term, from here to Election Day, there is little that can be done other than to establish bridges with both campaign teams, explain the Mexican perspective and procure minimizing future damage. And hoping that the worse scenario does not materialize.