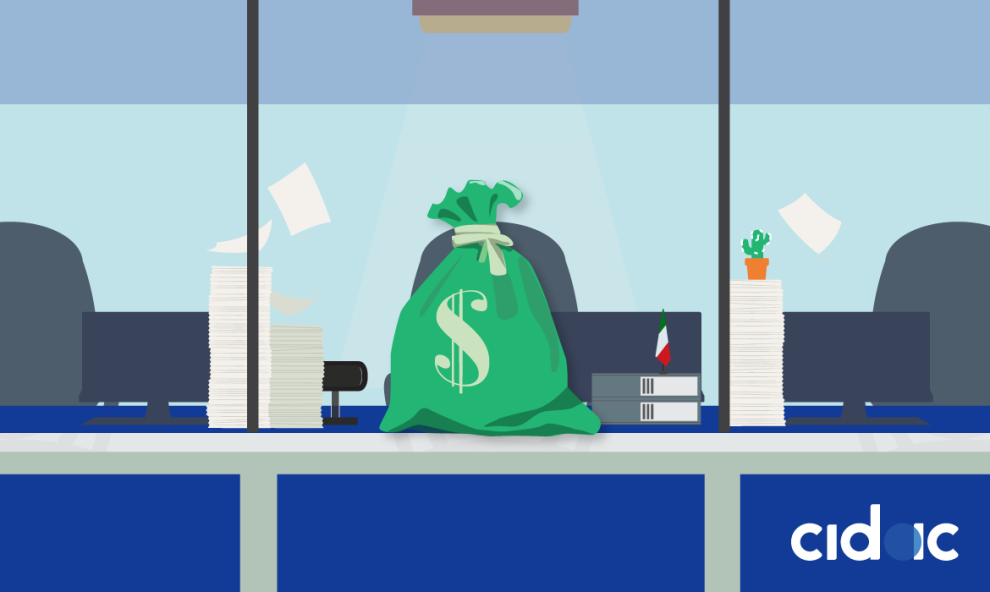 Corruption has become the nodal leitmotif of Mexican politics. Although overwhelming evidence does not exist with respect to the degree that the former affects, facilitates or impedes the functioning of the economy, the political factum is that corruption has metamorphosed into the factor around which public discussion, electoral processes, and decisions on savings and investment gyrate and, however much they deny it, the politicians’ calculations.

Beyond the analytical evidence or absence thereof, at least part of the intellectual, political and economic paralysis that the country is experiencing is due to the perception of the ubiquitousness of corruption.  The question is what to do about it.

Instead of heading up the procession, the government has managed to ignore the problem, procrastinating and creating (or promoting) mechanisms designed to keep up appearances without anything changing. The vacuum that this non-acting created got the government clobbered in last Sundays elections, while it handed the initiative on issues of corruption in the hands of activists and NGOs, many of which have turned their cause into a new religion, basing their feat not on analytical arguments (in part because the evidence is not infallible), but on beliefs: if one or another program is promoted or if a pre-established formula is adopted, corruption will evaporate as if by magic.

At the heart of the discussion (or of the array of monologues that proliferate) on corruption lies a fundamental contrast of views: for some the solution to the problem of corruption resides in new laws, independently of the fact that there’s an interminable pile of laws that are not applied. María Marván of says there is no problem sufficiently small not to merit a new law or sufficiently large not to justify a constitutional amendment. But that does not dissuade the believers, who suppose –against all historical evidence- that more laws, more regulations and more requirements, in addition to new commissions and new governmental agendas, will eradicate the phenomenon. At the end of the day, the relevant question is whether this manner of proceeding is susceptible to modifying the reality, which is all that matters.

The alternative is to think contrariwise: instead of engendering more of the same (more laws, more bureaucracy), why not recognize that, at least partially, what generates opportunities for corruption is precisely the nature of our laws, regulations and bureaucratic organisms? Might it not be that the existence of so many restrictions, bureaucratic attributions and requirements is what makes possible -and, in fact, furthers- corruption?

A personal experience, in a very specific space, taught me a great lesson: when I was a student in the U.S., I went one day the Registry of Motor Vehicles to request the insertion of a hyphen between my paternal and maternal last names on my driver’s license due to the problems I was having at the library and at the bank, in that in line with U.S. usage, they were recognizing me according to my “second last” name and not the first. Thinking of this as something obvious, I went to the office and requested the change. The desk clerk was very kind and correct and opened the page with my name on his screen but showed me that he did not have access to those fields. He told me something like “I sympathize with your problem because I went through the same thing myself, but it cannot be solved except with a mandate by a judge”.

Years later, when the express abductions began in Mexico City, I went to the drivers’ license office in my local government to request a change of address in order to remove that of my home. Armed with a statement with my office’s domicile, I explained the reason for my visit to the functionary.  Without blinking an eye, he told me “one hundred pesos”. One hundred pesos for what, I asked him. “It is one hundred pesos for the service”. And if wanted to change my name on the license? I retorted. “One hundred pesos” came the response. The one hundred pesos were for doing me the favor of changing the information and the functionary had access to any field on his computer, conferring upon him enormous power.

I cannot affirm whether the Mexican functionary was corrupt and whether the U.S. model was one of utmost probity. What I do know is that the conferring of such great discretionary powers on minor functionaries (and major ones) is immensely propitious to corruption. It would not occur to the U.S. civil servant to charge for the “service” because he had no possibility of providing it.

If one extrapolates these examples to the daily life of the bureaucracy where construction projects, purchases, contracts, regulations and all kinds of permits, licenses and concessions are decided upon, the potential for corruption is immense. Discretionary powers in the hands of public officials acting without effective counterweights are equivalent to a golden opportunity to commit arbitrary acts. Although the federal bureaucracy faces an infinity of review mechanisms (that obviously do not hinder corruption), at the state and municipal levels that does not even exist.

After 500 years of history –three hundred of colony and two hundred of bureaucratic reign- it would be reasonable to conclude that more requisites and restrictions would yield exactly the same result: simulation and impunity.